Hello my favorite foodies! I know it has been a while since I last made a blog post, but I had a lot of personal things going on which were consuming my time, but now I am back and I am better than ever! First, I would like to say Ramadan Mubarak to all of my fellow Muslim brothers and sisters out there. I know this fast is tough, but it will all pay off in the end! As a food blogger, I sometimes have to resist the urge to eat as well, but I had a little cheat day this past week and I wanted to share it with you all.

Additionally, I wanted to introduce to you all a new series I have started called “Dinner and Dessert.” Have you ever went to dinner and been in the mood for dessert, but the restaurant’s dessert menu did not look so poppin’? Well Dinner and Dessert is a new series that I want to showcase for you all so you and your date or friends can grab dessert after dinner. Since today’s post is the kickstart to the series, I am going to tell you all about a little adventure I had the other day at Ponce City Market with one of my really good friends, Judith (@Judisauce). 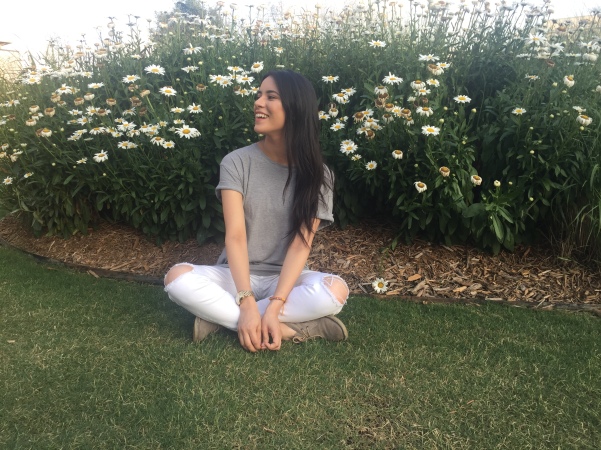 The first place we went to was a new Indian restaurant that opened in PCM called “Botiwalla.” Botiwalla is an Indian street food inspired restaurant similar to its famous sister store “Chai Pani.” As soon as you enter Botiwalla there are little Indian antiques everywhere, tasty Indian snacks, and fun art on their walls. It kind of feels as if you are walking into an Indian tea shop. The ambiance is super casual, laid back, and very welcoming. Before I go in detail about my experience here, I would like to give you all a disclaimer that unlike most Desi restaurants, Botiwalla and Chai Pani are not halal.

Botiwalla’s menu has a variety of Indian treats with an American twist. From tempting options like “Masala Smashed Potatoes” and “Tandoori Fried Chicken,”  it was tough making a decision on what to order. However, Judith and I  finally settled and ordered their SPDP Chaat, Lamb Burgers, and Chicken Tikka Roll.

The SPDP Chaat were little bite size puri (Crispy Indian puff hallowed inside) filled with a cooling raita and topped with chutney and spices.Their lamb burgers were made fresh to order and were topped with a yummy cabbage slaw. The burgers were very juicy and the slaw was freshly made, however, in my opinion, they needed a little bit more seasoning in the meat. Growing up, my mom’s burgers were full of spices, and her focus wasn’t to just “taste the meat.” My mom preferred to complement the taste of the meat by adding additional flavor. However, if you prefer the taste of the meat over seasonings, then I am sure you would enjoy the burgers. When it came to the Chicken Tikka Rolls, I did not get a chance to try them because I was too busy chatting away with Judith. However, she did say they were spicy and tasted pretty good.

Morover, the prices of the food at Botiwalla were kind of steep. Being Desi, I know what rational Desi prices are like, and Botiwalla’s were a little high for their portions. I would like to note that I am not singling out this particular restaurant, but almost all of the restaurants in PCM are expensive and serve small portions. I spent about $20 at Botiwalla. I would have spent $15 if I had skipped out on the Coke, but PCM is just pricey.

All in all, my experience at Botiwalla was great. The staff was nice, the environment was super cozy, and the food was good. If you aren’t into super spicy Indian food but are still craving Indian cuisine, then I’d recommend checking out Botiwalla in Ponce City Market. 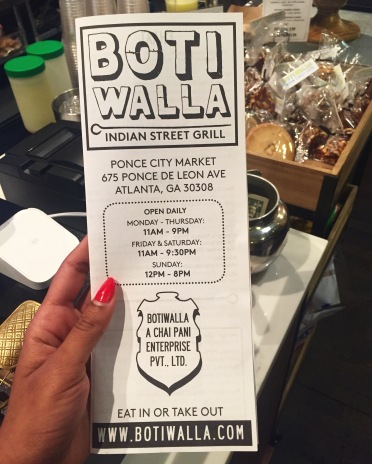 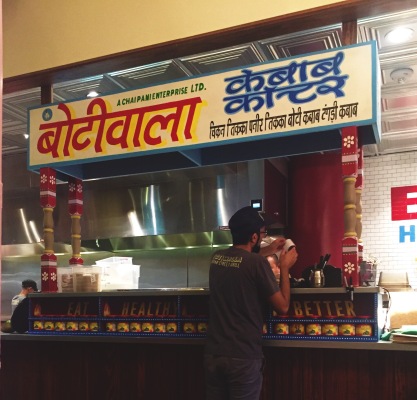 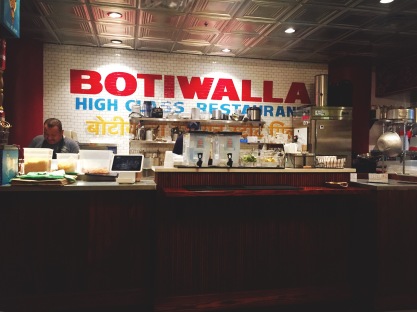 Whether you want your gelato on a cone, a cup, in a cookiewich, or even in a shake, Honeysuckle’s treats are always a pleasure. If you get the shake, they serve it to you in a mason jar and you get to keep it! Of all the mouthwatering options, I got their dark chocolate gelato and Judith got their mint gelato. The gelato was so soft and filled with real flavors of dark chocolate. It was not too heavy and was the perfect post-dinner treat.

Honeysuckle’s prices were around the same price you would pay at a typical Atlanta ice cream shop. Prices ranged from $3.50-$6 for whatever option you were interested in. I would not say the prices were outrageous, I would say they were average and I do not mind paying that much again. The gelato was definitely worth the price and was delicious.

I think my review was pretty self-explanatory, and I hands down recommend Honeysuckle Gelato as a post-dinner dessert spot. 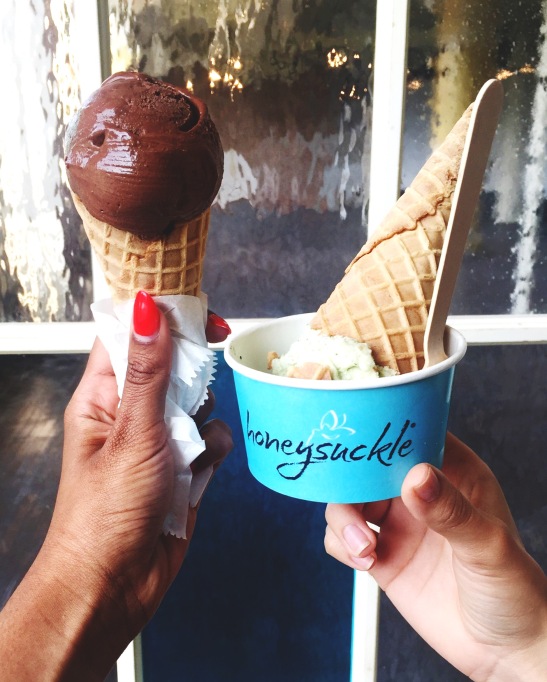